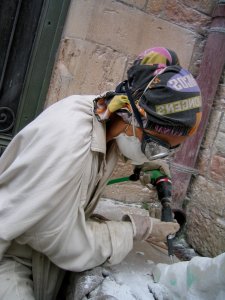 My first experience with carving stone was inspired at ceramics classes, by the thought that when stoneware was fired at 1300 degrees, it virtually goes back to stone, the very element that it originated. I therefore decided to learn sculpture and during the first class, was handed a block of ancient fossilized rock in Montpellier, France. Baffled by the anonymity of the element, I decided to just chisel at top centre and to my amusement, I seemed to see an eye looking out to me. This first day and in two hours, I uncovered the head of an old man gazing with one eye-brow upwards.

When the master sculptor came in, he was amazed and quoted a saying of Michelangelo that every block of stone has a statue inside it and it is the task of the sculptor to discover it. "I saw the angel in the marble and carved until I set him free." It was his proof that I had to continue.

Later I visited the site of Michelangelo’s quarry at Pietrasanta, situated at the heights of a mountain that glimmered like a snowy mountain in the midst of summer due to the purest kind of stone forming the mass. This was the white marble preferred by Michelangelo himself.

My look towards stone has never been the same since...